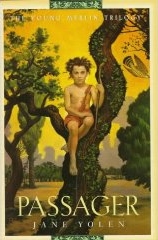 Jane Yolen has created a wonderfully original version of the early life of Merlin, the legendary wizard of Arthurian tales, in these books written for readers of ages 8­12. Passager and Hobby are expanded versions of two short stories, “The Wild Child” and “Dream Reader”, published in 1986 as part of a collection of Arthurian tales called Merlin’s Booke. In Passager, a young feral boy, abandoned in the forest, is captured and befriended by a falconer who restores both the boy’s name and his humanity. In the second book, Hobby, the boy Merlin’s sight helps him escape from a fire, although he cannot save his adopted family. Leaving the new home he had found and calling himself Hawk, he is befriended by a company of traveling performers. Ambrosius and his assistant Viviane exploit his talent for dreaming the future, but ultimately flee from the power behind the boy’s visions. In the final volume, Hawk falls into the hands of the wild folk of the woods‹the wodewose‹and is marked an outcast for his ability to dream. As the war between Uther and Vortigern destroys the home of the wodewose, Hawk-Hobby (as he is known to the wood folk) and another small orphan boy, called Cub, form a friendship that carries them to their destinies as Merlin and Artus.

Yolen weaves bits and pieces of many legends surrounding Merlin, such as his being the son of a princess and a demon, or a wild man in the woods, and uses these to explore the connection between the mage’s name and the ancient arts of falconry. Historical and cultural elements are blended into the legends surrounding Merlin’s feats as a dream-reader, and his meeting with the boy Arthur, who will become the most famous king of Britain.

A superb prose stylist, Yolen creates an evocative sketch of her character, which is more an enigmatic glimpse of Merlin than a retelling of any of the traditional tales. Spare and sophisticated, these books will probably appeal to the adult reader as much as (or more than) its intended audience. This trilogy is recommended for any fan of Arthuriana, or, for that matter, any lover of well-written fantasy.