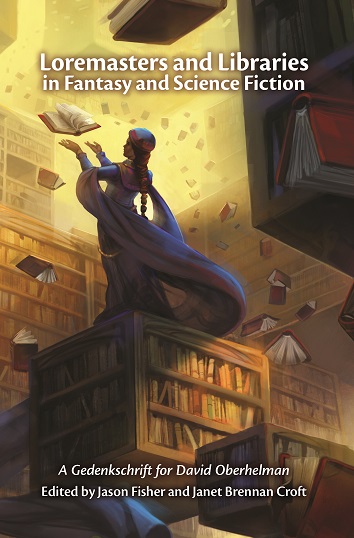 Loremasters and Libraries in Fantasy and Science Fiction

A Gedenkschrift for David Oberhelman


David Dean Oberhelman (1965-2018) was a librarian and scholar with wide-ranging research interests, who had a long association with the Mythopoeic Society. He was an enthusiastic supporter of other scholars, a gifted editor, and an outstanding teacher. The core concept of this collection developed from panel discussions in which David drew together a group of fantasy, science fiction, and comics scholars to discuss libraries, librarians, archives, research, writing, and related topics as depicted in these genres. In this collection, his friends and colleagues explore the enduring importance of the historical record in its many forms, the concept of writing as a creative gateway to other worlds, the otherworldly geometries of the interconnectedness of information represented as what Terry Pratchett called “L-space,” and the depiction of learning and scholarship in invented worlds. There is something recursively satisfying in books about books, research about research, writing about writing, the librarianship section in a library.


Conner Kirk and Victoria Gaydosik, “The Novel in the Library and the Library in the Novel: At the Intersection of Literature and Library Science”
Kristine Larsen, “‘Books! Best Weapons in the World’: How Libraries Save the World in Popular Culture”
Nicholas Birns, “When You Have Read It, It Will Be Destroyed: The Fugitive Archive in Fantasy and Science Fiction”
Phillip Fitzsimmons, “Books Within Books in Fantasy and Science Fiction: ‘You are the dreamer and the dream’”
Janet Brennan Croft, “Is there an Index to the Prophecies? or, Finding the Needle in the Enchanted Haystack”


Part 4: Other Individual Authors and Sources


Elise Caemasache McKenna, “L-Space: Libraries and Liminality, A Place of Magic”
David L. Emerson, “Fforde’s BookWorld as Meta-Library”
Susan Adams-Johnson and Anna Holloway, “Libraries as a Fulcrum of Change: Eric Flint’s Ring of Fire: 1632”
Liorah Golomb, “‘My kind of librarian or your kind of librarian?’: Information Seeking Behavior in Supernatural”

Edited by Janet Brennan Croft and Jason Fisher
Published in February 2022; available both in print and electronic formats

Other electronic versions (from Smashwords) $9.99