The High History of the Not-Ready-for-Mythcon Players


Bemused Mythcon attendees, during the past decade and a half, have been subjected to an odd bit of evening programming titled "The Not-Ready-for-Mythcon Players," which, to the uninitiated, looks like a bunch of crazed Mythies running around on a stage, waving or wearing sheets. In fact, this piece of tradition can be blamed on Ursula K. Le Guin ... but I should start at the beginning. 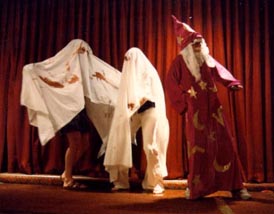 The 1987 Mythopoeic Conference at Marquette University in Milwaukee was honored to have not only Christopher Tolkien but also John Bellairs as Guests of Honor. A fantasist whose delightful wit is mostly known from a series of young adult novels, Bellairs had also written a couple of bizarrely hilarious but hard-to-find pieces, such as St. Fidgeta and Other Parodies and The Pedant and the Shuffly. Debby Jones and I decided to stage a condensed version of the latter as a masquerade entry, to introduce the story to more people. In this tale, an unpleasant wizard (the Pedant) changes people he doesn't like into creatures called "Flimsies" -- which look like dinner napkins soiled with gravy and cranberry sauce. Not having such condiments available in the Marquette cafeteria, we covered Eric Rauscher and Sherwood Smith with sheets coated with chocolate sauce and cherry jam, and put on our little play. Bellairs professed himself charmed, and gave me his permission to distribute xerox copies of his story (one of which went to Peter Beagle, also in attendance at the conference).

These sheets did not survive, but the idea did, and I was struck one day, while in the shower, with the appropriateness of re-enacting the "Fall of the Tombs of Atuan" for Ursula Le Guin's presence at the '88 Mythcon in Berkeley. Sheets were obtained and dyed, and eight volunteers assembled to impersonate the other tombs. Le Guin was, according to witnesses, convulsed with laughter, and when David Bratman presented her with the script (written on a napkin during the banquet), she told him that we should do this every year. We have.

Subsequent Not-Ready productions have covered various works by Mythcon guests of honor, and/or general conference themes. Some of the playlets have been forgettable, and are best forgotten. Others have presented unique opportunities of perfect casting, such as David Bratman as Mr. Peabody and Pat Wynne as his boy Sherman, manning the Wayback Machine to visit the Romantic poets. We were challenged by Guy Gavriel Kay to incorporate the most famous typo in his Fionavar trilogy ("an army of five hunched men") into a play, and did so the next year as part of "Sam Spadgee and the Case of the Missing Mythcon." 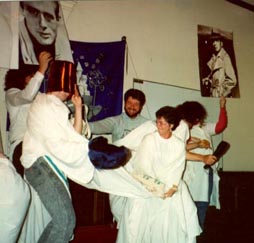 Tolkien's works have been a fertile ground for inspiration. One of our troupe's highlights was a Monty Python-esque performance of "Famous Battles of Middle-earth" during the 1992 Tolkien Centenary at Oxford, where we enlisted Keble's sheets to augment imported posters of Bogart and Dean (for "Battle Beneath the Stars") and Bic lighters ("Battle of Sudden Flame"). For the Boulder Mythcon a few years ago, we put on "The Return of the Shadow... Puppets" as a Balinese wai-ang performance. In Malibu in 1997, so close to Hollywood and the center of television production, we presented previews of a completely Tolkien-inspired television series line-up, including "I Love Luthien", "Melkor Place", "Last Little Homely House on the Prairie", "Gilgalad's Island", "Istari 5-0" and "Beowatch." I was delighted to be able to enlist the help of two members of the Elvish Linguistic Fellowship, Carl Hostetter and Arden Smith, who composed an alliterative description of the surfer Geat drama.

In celebration of the 1998 Lewis Centenary Celebration, we tackled a unique opportunity to reveal the truth behind C.S. Lewis's novel, That Hideous Strength, as FBI agents Mulder and Scully investigated a peculiarly English X-File in "Jose Chung's 'From Deep Heaven'. " The following year's combined BreeMoot/Mythcon showcased the overlooked "Warrior Women of Middle-earth" (including Luthy the Vampire Slayer and Xenowyn, Rohan Princess). 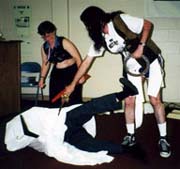 To begin the new millennium (or end the old, or whatever), the Players took a trip to the Big Island and joined Hawaii 5-0's intrepid investigator, McGandalf, to recover a stolen ring of power from the evil Wo Fat Sauron. Continuing this tradition of visiting exotic locales, the 2001 conference in Berkeley sent us to the netherworld, specifically to Charles Williams' Inferno as conceived by Hong Kong martial arts films. The Shakespearean theme of the 2002 conference inspired a performance of "To Say Nothing of the Doge," taking characters created by author Guest of Honor Connie Willis into the Forest of Arden. Most recently, 2003's Nashville location led to a country western flavored re-enactment, mixed with a serving of Greek tragedy, of the gift-giving scene in Lothlorien.

As creator, director, writer, producer, costume and set designer, music coordinator, dialect coach, and actor, I cheerfully take full blame for the Not-Ready Players; but I would like to share whatever credit we may have earned from generous Mythcon audiences with the stalwart group of Society members who are willing to make fools of themselves in front of both friends and complete strangers each year. We hope you will enjoy next year's performance, and hope to continue our efforts for many future Mythcons!


Production History for the Not-Ready-For-Mythcon Players