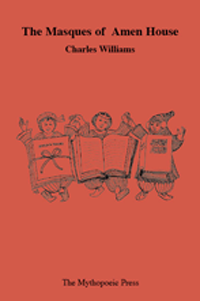 The Masques of Amen House

Charles Williams worked as an editor of the Oxford University Press (OUP), whose London offices were in a building called Amen House. In the 1920s, Williams wrote three short plays (masques) celebrating the work of the Press, two of which were performed by Williams and his co-workers for the entertainment of the OUP staff. The first play, "The Masque of the Manuscript," traces the development of a manuscript to a published book; "The Masque of Perusal" deals with the sale of the book; in "The Masque of the Termination of Copyright,", the book is rediscovered and reprinted. These plays display Williams's wit, charm, and sense of humor. Also included in The Masques of Amen House: Williams's poems relating to the masques, selections from the music written by Hubert Foss for the stage productions, and extensive commentary by Bernadette Bosky and David Bratman about Williams and the masques.

The Masques of Amen House