The Mythopoeic Society is a non-profit organization devoted to the study of mythopoeic literature, particularly the works of members of the informal Oxford literary circle known as the “Inklings.”

The society’s activities — books, periodicals, annual conferences, discussion groups, awards, and more — are made possible by membership dues and donations.


The SWOSU Digital Commons is the official digital archive of the Mythopoeic Society.

The Mythopoeic Society is a 501(c)(3) non-profit corporation and donations are tax-deductible, as allowed by law.


Did you know ...the Mythopoeic Society sells assorted goodies, in addition to our excellent publications and the books we publish? Please visit our store and wander through. 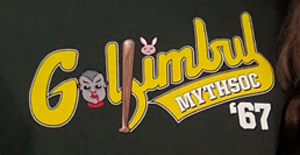 We Now Have Golfimbul T-Shirts!


Due to ongoing health concerns and the realization that we cannot now plan something that may violate future New Mexico state health and safety regulations, whatever they are in July-August of this year, the Council of Stewards has decided to postpone the next in-person Mythcon until summer of 2022; the date will be July 29-August 1, 2022. Our venue and Guests of Honor have all agreed to this change and the conference theme will remain the same.

The theme for our next IN-PERSON Mythopoeic Conference, Mythcon 52, is "The Mythic, the Fantastic, and the Alien" (with a small nod of the head to Area 51) and our Guests of Honor are David Bratman, Scholar, and Rivera Sun, Author. Do plan to come join us in Albuquerque, New Mexico, July 29-August 1, 2022.

Did you also know ...you can support the MythSoc when you follow our links to Amazon? The price is the same but the Society gets a little bit from your purchase.


The 2020 Mythopoeic Awards Finalists have been announced ...but the awards themselves have been delayed due to Covid-19.

Mythopoeic Nostalgia? Our final Mythopoeic Press Sale is on NOW

This collection of essays addresses various aspects of Peter Jackson's film adaptations of Tolkien's The Lord of the Rings including scriptwriting and the creative process, the place of the films in cinematic history, gender roles in the films and the books, wisdom and councils, hobbits and heroism, fan culture and fanfic, the use of Tolkien's languages in the films, and other issues.