The Encyclopedia of Fantasy 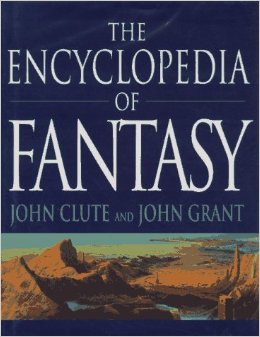 Two and a half inches thick, five pounds in weight, tightly packed with entries from “Aamodt, Donald” (American author of the “Zarathandra” fantasies) to Zu: Warriors from the Magic Mountain (a 1982 film made in Hong Kong), The Encyclopedia of Fantasy is in more than one sense a reference book of substance. It covers a wide field, “all the modes — text, cinema, comics, art, etc. — in which fantasy is expressed, because the field is remarkably integrated,” and it does so with notable thoroughness. It is the best kind of reference book, one to be turned to on a regular basis, in which most questions will be answered, but also one to be dipped into for enjoyment and edification. Numerous cross-references lead the reader through fascinating chains of related notes and articles, and to new critical terms invented for this book (for example, polder, an enclave such as Tom Bombadil’s realm within the Old Forest in The Lord of the Rings).

The core subject of the Encyclopedia is fantasy fiction from the last part of the 19th century through the present, with Tolkien the central and most influential author. Earlier writings are not ignored (to choose an example at random, there is a long entry on “Mesopotamian Epic”), but in general are treated less extensively, as is horror fiction (though there are, for example, entries for Stephen King and Bram Stoker). Films, television, and fantasy illustrators are also covered, in response to the valid argument that “fantasy art is, at its heart, a narrative form.” The Encyclopedia even takes (too brief) notice of fantasy in music, and music in fantasy. Inevitably, there are errors and omissions. Jonathan Swift is included, but not Samuel “Erewhon” Butler. Tolkien’s “On Fairy-Stories” more than once is called “On Fairy Tales” (in a nevertheless quite interesting article), and the bibliography of works by and about him betrays much ignorance of publication history and a poor sense of what should be recommended for further reading (David Day, Lin Carter, and Daniel Grotta-Kurska are listed, but not Verlyn Flieger’s Splintered Light). The bibliography following the entry for C.S. Lewis is no better. Also inevitably, rather too much space is devoted to some entries and not enough to others. Does anyone really need a full page describing all of the incarnations of The Addams Family (delightful though it is)? The editors try to maintain a distinction between Fantasy and Science Fiction — the latter is the subject of an earlier encyclopedia — while acknowledging (with entries for “Science Fantasy” and “Technofantasy”) the blurred line between the two; but inexplicably they omit separate entries for the Star Wars films, and for television’s Dr. Who, both of which contain pronounced elements of fantasy. However, every Tarzan film ever made is described at great length (eleven pages), on the grounds that these take place in a “land-of-fable” jungle. (Here I am in profound disagreement with John Grant that Tarzan’s New York Adventure is “a flat movie.”) The Encyclopedia’s coverage of comic books is spotty at best, and disastrously the editors give only a few brief mentions, no separate entry, to Jack Kirby, the most important single figure in the history of the form. One could go on; but despite its flaws, The Encyclopedia of Fantasy is an essential work which belongs on the shelf of every serious enthusiast, alongside such other important, but less wide-ranging, reference books as Fantasy Literature: A Reader’s Guide, edited by Neil Barron (Garland, 1990), and the St. James Guide to Fantasy Writers, edited by David Pringle (St. James Press, 1996).